New F&TM Release! Where the Land Meets the Sea 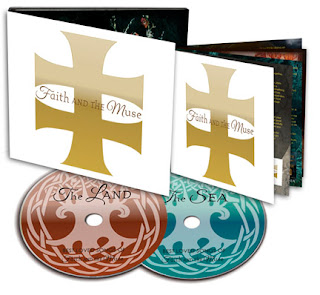 This took over a year of work, but at last we created something for everyone. We didn't want to just come up with a "Best Of", it's more about the journey of the music we love. It's nostalgic and comes from the heart to long-time fans. And we also had the great fortune to have a loving introduction to the CD written by Thom Carnell, writer and editor of Carpe Noctem Magazine.

The idea of "Where the Land Meets the Sea" was a long time in thought… The Land and the Sea… how best to explore this theme through our own style. So I chose to find the basis of the design from each album, and then go with the colors, find a design to merge it all together into one grand scheme. Stone backgrounds for the Land, water for the Sea, then rich colors, purples for Elyria songs, blues for Annwyn songs, and so on… And then white and gold for the outside, to give it a strong but simple cover. That was William's idea and I thought it was a great one.

Faith and the Muse have been around since 1993. But I've seen so many comments from people who only seem to know one or two songs, or worse, have watched one video of Faith and the Muse, and then comment some general statement about our music, or how we look, what we believe, what we think, who we are... And anyone who knows the band well knows we can't be understood by one song, or one lyric. So I do think it's time to reintroduce the band as a whole to a new world, which includes a very big internet world now - not just new to the scene, as it were.

Having said that… I also think it's a good time to bring back some of our music to those who have been there from the beginning and let them remember who and where they were at the time of each album, so it's a fantastic sentimental journey.


The CDs are in order of the releases, the booklet is broken into all of album backgrounds and photos of each era. I wanted to let people travel back and through, take the journey with us again. It's kind of fascinating to see how we changed through the years.

The Playlists: I've had many fans tell me they've created their own song lists in a similar fashion, where they put the softer, ambient songs together and the hard rock songs as well, so we thought it might be a great new way to play with the diversity: 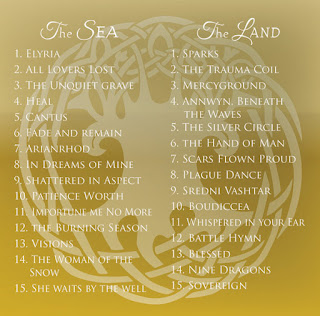 This is a very limited release and only on CDs. If you love Faith and the Muse, this would make a fantastic gift. Give "Where the Land Meets the Sea" to friends or loved ones, someone you'd like to share your music with.

XXOO,
Monica
Posted by Unknown at 8:11 AM